Disclaimer:  I have zero knowledge of nor expertise in the fields of economics or real estate.  The following is simply a summary of my own thoughts regarding trends in the housing market and what little I’ve learned of how to follow them.

Back in university, a friend of mine who was studying economics told me about a paper he was working on.  The subject of the paper was how when interest rates rise, people on variable rate mortgages have the level of their monthly payments rise and subsequently have a tougher time meeting them if they’ve overstretched their budget.  Subsequently some of those who are struggling to live paycheck to paycheck foreclose.  For each foreclosure, banks take on losses that they want to recover from quickly so they turn the homes over to the markets.

In an economy where interest rates are high, people are less likely to want to buy homes due to the high costs.  With extra homes being dumped on the markets by banks, it adds to the supply which outstretches demand and causes the market to become over saturated.  This causes the value of homes on the market to decrease.

Certainly I’m no expert on economics nor real estate, but as someone who wants to make the absolute most of the money I earn, I took heed of his suggestion.

As can be seen by the graph on the right, there was a higher percentage of customers behind on their payments after the last interest rate increase.

Over on the big picture there’s a couple great posts that are of considerable interest.  One on housing price risk and and the other demonstrating a heatmap of US foreclosures.  The graphic on the right was from one of these articles. 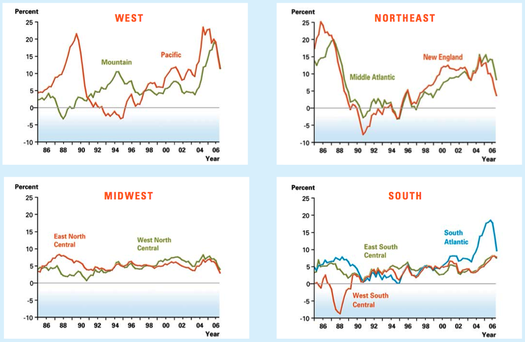 Another interesting graphic is one that shows home prices by appreciation as diagramed by region.

Originally sourced from: Census Division, % change over previous four Qs (as of Q3 ’06)

This graphic demonstrates the trend in the last 20 years and showcases the negative appreciation across all regions.

Comparing these charts to the last 20 years of the federal fund rate as evidenced by the graph below obtained from wikipedia.

It is interesting to note that in many cases, housing markets depreciated when interest rates went up in 1998 and failed to gain considerable ground throughout the downwards rate trend leading into 2002.  By 2003, with really low interest rates, all markets in the graphic above showed signs of appreciating up until rates began increasing in 2005 where another major downward trend began.

Thinking back to the comments made by my friend, what he described may have been on point.

If this creates a trend that continues, it could cause housing values to continue dropping and an overall devaluation of the market.  How long this trend shall last is unknown, however there may be some who are able to capitalize on the depreciation in the housing market and pick up homes before the markets reappreciate in the distant future.

Of particular further reading on the subject is one blogger’s perspectives on the forecasting by lenders of how how the fed’s will change interest rates.

I’m slowly learning more of the principles of economics.  One such example is the zero-balance of the economy.  Those who live paycheck to paycheck deep in debt are the ones who end up foreclosing while those who have the savings and solid financial foundation are able to capitalize on those losses to purchase a house for less then it is worth given the flood of foreclosures.

For those jumping on the new 100% financing offered by Bermudian banks to Bermudians, you should ask yourself what the potential is that the property you’re purchasing could at some point depreciate.  If this was to occur, would you be able to cover the losses in the equity value of your home that you actually never had?