Will the fallout of subprime loans be the catalyst to push the United States economy into a recession in the coming months?

As my interest in studying the markets grow, I’ve taken to writing a little bit more about my limited understanding of them.

One of the theories I’m following is what impact the fallout of subprime mortgages will have on the overall markets.  It suggests that in a lending boom, banks run out of people to lend to due to low interest rates encouraging a large number of people to buy, so they start giving out subprime mortgage loans.  Due to the lower interest rates, variable rate mortgages are attractive because they are offered at a much lower rate than fixed.  What the common individual with poor credit and limited financial knowledge doesn’t account for, however, is that variable rate mortgages reset after two years and the interest rates can rise considerably in that time, as they have in the last couple years.

Above is a chart garnered from a blog called At These Levels, though modified to indicate present standing in July.  What the above chart indicates is the amount, in billions, of resets of varying types of adjustable rate mortgages.

What is important to understand is that when someone with bad credit and limited financial understanding is given a loan (often when they cannot actually afford it), they may stretch their budget further than they will be able to manage when their rates reset.  So, now that interest rates are much higher and resets are occurring, people are suddenly watching as their low mortgage payments turn into high ones.  This can cause strain and for many is unsustainable, so people start dumping their homes on the markets in order to recover any possible value prior to being foreclosed on.

People begin missing their payments as they try to sell their homes.  Being as interest rates are higher, it becomes harder to sell homes and thus supply quickly outstretches demand and the inventory of unsold homes begins to rise. 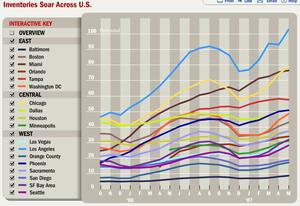 The money to fund these loans comes from banks who acquire the money through selling bonds or bond based funds.

So, you buy a bond (guaranteed specific investment return) and the bank turns around and uses that money to give out subprime loans.

Many resets happen do to interest rate increases.  People with bad credit who are living paycheck to paycheck are now stretched and can’t meet their payments.  Mass sales of homes begin to happen as people try to beat foreclosures.  Housing bubble bursts (as it has been doing) and the banks start foreclosing.  Banks can’t sell homes at previous value to recover and end up with losses as they are in the banking business, not the housing business.

Assets listed by banks in the form of mortgages given out on the basis of securing bond based portfolios begin to look overpriced because homes no longer carry the value they once did and many are being forced to foreclose.  This causes the banks to then have to revalue the assets of the funds they offer which causes them to be revalued for lower than they were previously reported.   This results of this revaluation is said to be coming for the 3rd quarter in September.

If the revaluations are bad enough, investors then lose confidence in the markets and start dumping their stocks in hopes of taking profits from the recent bull markets.  What happens when investors flood stocks on the market?  Over supply, less demand.  We then find ourselves in a situation where we’re either approaching a major correction in the markets or the beginning of a recession as the combination of the poorer segments of the economy are now budget stretched and the higher segments lose a fair bit of their gains in the markets, people flee to safer investments as overall spending in the economy grinds to a halt.

Of course, I really know very little about the markets and these are just ideas formulated on a very basic understanding so I’d welcome input from those out there who are a bit more knowledgeable than I.  Looking back on it now, I wish I’d taken economics as my first year elective in university as opposed to psychology.