Back in October I expressed disappointment at the poor statistical analysis of the decline in the ratio of Black executives in the workforce.  Subsequently, I’ve done some digging and discovered that the Commission for Unity and Racial Equity produced the comprehensive, non-spin based, numbers I was looking for.

As part of the Annual Review of the Workforce Survey Report 2006, here is the depiction of the Level of Employment by race for 2006. 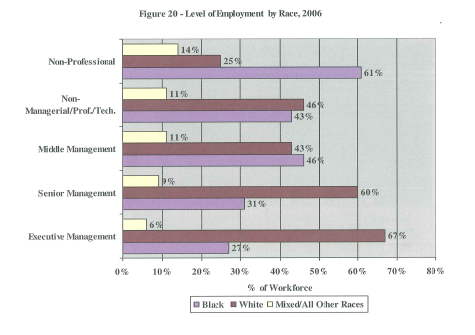 So, we’ve had over the years a gradual decrease in the number of executives overall, black executives included, however, the percentage of black executives has been generally trending upwards indicating that despite the wild claims of some, international business may well be doing it’s part in promoting blacks in the workforce.  Though, of course, all we really care to focus on is the one year drop from 29% to 27% in 2006 rather than focusing on the data that has been available for 5 years, right?

Now, here’s the real kicker.  While digging through the actual hard numbers I discovered that ‘black executives’ isn’t the same as ‘black Bermudian executives’ in CURE’s statistics.  I’ve realised that I was making the incorrect assumption that CURE statistics was dedicated to promoting equality between Bermudians in the workforce.  However, this was not the case as CURE was originally studying race overall including Bermudians and non-Bermudians in their reports. From 2004 on, statistics have been improved to give breakdowns of employment levels by race and Bermudian status, which presents a far different picture.  This leads me to a whole new question, how are non-Bermudian’s being worked into the justification for why workforce equity legislation as it exists in it’s draft form is necessary and should they be non-Bermudians be included when calculating whether black Bermudians have fair representation in our workforce?

More on this with greater investigation of the real hard numbers to come, as time allows.