Before we got sidetracked with some weak humour, we were exploring the hard numbers for black executives.  When we last left off, we were asking the question of how non-Bermudians impact the statistics that measure the level of employment on a racial level.

Here’s what we examined, the stat for Level of Employment by Race in 2006 from the Commission for Unity and Racial Equality’s Annual Review of the Workforce Survey Report of 2006. 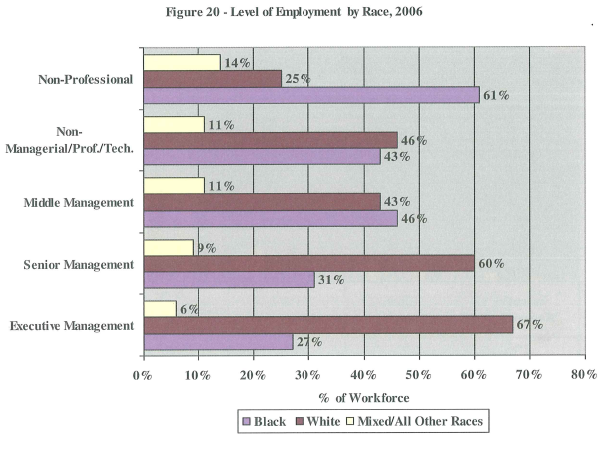 As suggested, it’s a startling stat, up until you realize that this isn’t a Bermudian only statistic because non-Bermudian racial demographics are included. 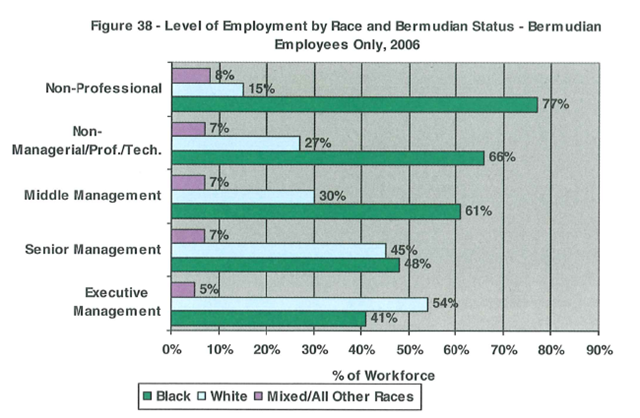 Ah, does this give a better picture?    Suddenly whites no longer dominate Senior and Executive management and the numbers make a bit more sense as the disparities between the race are less drastic and closer to Bermudian demographics.  While there is much more to be explored in this chart such as it’s implications of racial equality amongst Bermudians in the workforce and the causes thereof, let’s not get sidetracked just yet.

So, now lets look at the demographics of non-Bermudians in the workforce by Level of Employment. 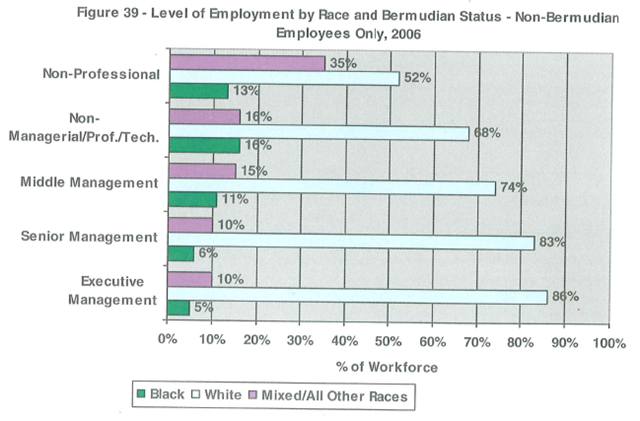 Woah!  Whites dominate every level of non-Bermudian employment.  But wait, is that really shocking?  Let’s take a rough guess at the countries that are most likely to contribute non-Bermudian workers to Bermuda.  Are they most likely to be Canada, the United States and the United Kingdom?  Lets run with this assumption and subsequently examine their racial demographics.

According to the 2001 Canadian Census, 83% of the total population of Canada claimed they are white and only 2% claiming black.

So, if the most likely places that our International Businesses are to pull workers from are countries with white majorities is it really surprising that non-Bermudian level’s of employment are white dominated?  This when non-Bermudian demographics actually already appear to be representative of the racial demographics of the countries from which non-Bermudians originate?

Is it then right that we spend our time focusing on levels of employment by race overall when they are inherently skewed by non-Bermudian demographics?  Perhaps we shouldn’t be allowing the expatriate factor to skew our statistics when our focus should be on two core goals: