To add to the chorus of dismay with regards to Auditor General Heather Jacobs Matthews 2008/09 Consolidated Fund report, the initial results are downright shocking and do not signal prudence at the managing of our budget over recent years.   Ms. Matthews report outlines some of our greatest fears for Bermuda as we show increasing evidence that we’ve left ourselves with little buffer if things get worse.  Even more concerning are our finance minister’s nonchalance that everything is ok and her rather meek attempts at deflecting responsibility for our runaway budget.

Undoubtedly you’ve already seen it but the Bermuda Sun’s graphic is incredibly telling.  In the last 5 years we’ve witnessed expenditures vastly outrun our revenues, deficits and debt skyrocketing with no signs of it abating.  This at a time when we’re facing the fallout of a significant local recession on top of a global one along with threats of tax changes in the US.  We simply haven’t left ourselves much in the way of a means to stay afloat if we go off the deep end.

Finance Minister Paula Cox seems to continuously rely on the “well, everyone else is doing it” argument for jumping off a cliff.  Defending her actions in a recent opinion piece Ms. Cox suggests that the comparative US and UK fiscal deficits are an adequate reason for why we can let our own deficit grow.  Ms. Cox argues:

The core problem with this argument is that our deficit began to grow out of control in a boom period when times were good and Ms. Cox was raving about 5 consecutive budgets where revenue outstretched expectations.  The US primarily grew its deficit over the last years due to a number of large wars, not vast overspend on capital projects.  Besides, we are a tiny island governed by completely different economics than those of superpowers.  The US and the UK have at their disposal mechanisms to adjust their debt and currency levels that we simply don’t have.  As an example, the US has taken to printing over a trillion dollars to deflate their currency thus adjusting their debt levels.  Whether or not this is a prudent move to take is debatable but ultimately they have a diverse economy that allows them to take to these forms of quantitative easing in hopes of stimulating the economy.   We don’t.

We’ve already expressed concerns at the ratio of local Bermudian $ borrowing versus savings and since we did so, the ratio has continued to climb.  We can note the latest regulatory update from the Bermuda Monetary Authority shows that we’ve become even more reliant on foreign borrowing to sustain ourselves and this is without even considering the borrowing our government is doing.

We are increasingly reliant on borrowing foreign money to sustain ourselves and despite arguments that we’ve invested in infrastructure with our debt, the reality is that in a great many cases we vastly overpaid for that investment.  Would you readily pay me $2 for a regular $1 coin?  Likely not as you’d end up with something worth half as much as you paid for it.  So why do we think overpaying for Berkeley, the new cruise ship pier and the Port Royal renovations are good value for the added debt we’ve undertaken?  The worst part is that not only does the list of overspend go on but here is how our Finance Minister justifies it:

The Minister of Finance operates as a cog in the wheel. My role is to add value and to provide input on fiscal positions taken in various ministries. I can indicate support or objection. However the sponsoring minister(s) knows that I cannot overrule their request unless I have others who join with me to support and uphold my position.

Individual Ministers are 'finance directors' in their own right and have a responsibility to keep a keen eye on how their senior officials manage their budgets and projects.

There we have it, the ‘Finance’ Minister has no power in actually managing finances and admits to no accountability for overspend.  The Minister of Public Safety is willing to take such a stance that he’ll resign to uphold his position while the Minister of Finance is “Politically neutered”.  But hey, we shouldn’t worry as the Office of Auditor General, you know likely the only department to actually have its budget restricted, office space contained and it’s head arrested twice, is part of the ‘accountability framework’.

In the end, Ms. Cox is probably right that we should simply go along with it because everyone else is doing it, who knows, perhaps in 3 years we’ll be looking back at the musings of this “irresponsible and biased writer” to realize that everything said above was nonsense and completely wrong.  In the meantime it’d likely be wise to heed the wisdom of Gary Larson and always be sure you have a way out before following the herd of lemmings jumping off a cliff. 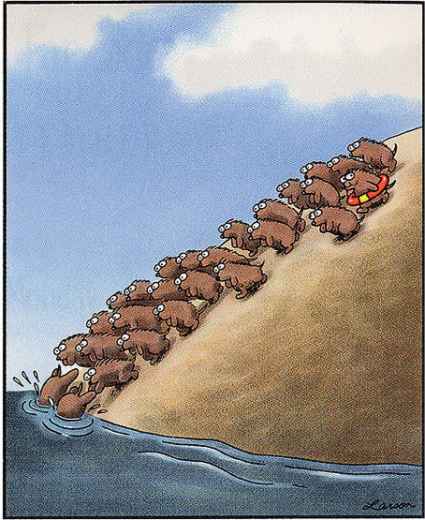 4 thoughts on “Jumping off a cliff?”