Union officials don’t seem to get it, businesses can’t simply hire if there is no demand for their services.  How do we know there is less demand?  Well, let’s look at estimates of consumption of non-Bermudian households shall we?

We’ll start by combining the earlier approximations of the number of households per non-Bermudian and match that against the 2004 Household Expenditure Survey to get an approximate idea of the average amount of spending per household.

What we can note is that since the survey doesn’t distinguish between higher earning non-Bermudian and lower earning Bermudian households, we’ll also need to approximate an adjustment to account for this.  In order to create such an adjustment, we can take the percentage breakdown of average expenditure of non-Bermudian households and apply that across the various expenditure categories. 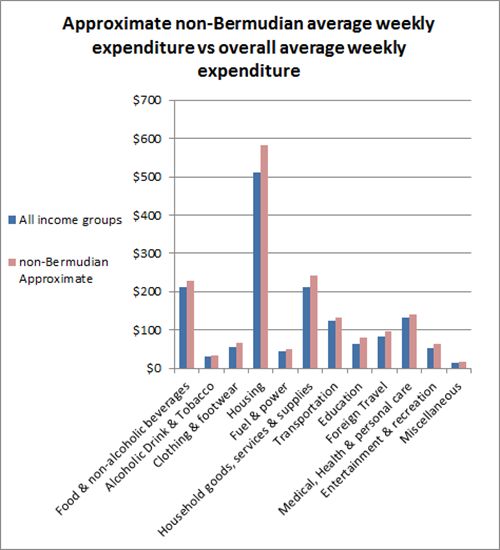 Using these numbers gives us a better approximate of the weekly expenditure of non-Bermudian households. 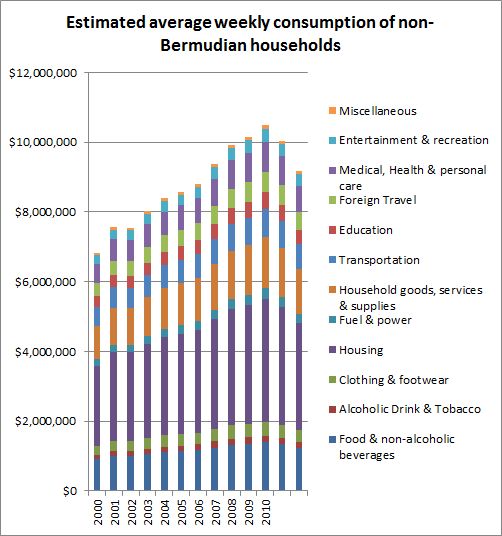 Next up we can look at the changes over the year and note that in 2010 there was approximately $800,000 less spent in our local economy each week than in 2009.  That’s a great deal of money no longer flowing through our economy. 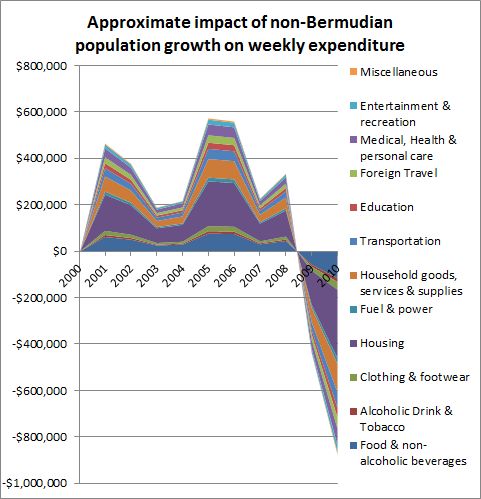 It is amazing to watch as clueless union officials chastise businesses for not hiring during the downturn.  Demand has plummeted, people aren’t spending because there are far less people to contribute to our economy.  Undoubtedly there are a great many businesses that would love to do what they can, however unfortunately if sales are plummeting (like they have for a couple straight years now), it simply isn’t possible for companies to hire on more people.  Perhaps unions should prove themselves by doing their own part and hiring on extra people, that and publishing up to date budgets to prove that they can do so without going heavily into debt.

All these statistics tell us is that our own local recession has been exasperated by a flight of expats, perhaps due to term limits and immigration policy.  We can blame the global recession all we want, but let’s remember, insurance isn’t the kind of business that is as heavily recession prone.  There are bigger implications and it is time we take a close look at our own policies and attitudes (aka. the “Go home Filipino” crap) we’ve created through stirring the xenophobic pot as the cause of all our problems.