There has been some talk of the introduction of a living wage in Bermuda.  That would be a mistake.  A living wage, or minimum wage puts a heavier burden on businesses that already struggle to employ people at the bottom rungs of society.  It adds more complexity, bureaucracy and oversight in order to ensure it works.  It has a risk of eliminating jobs and increasing costs rather than creating jobs.  A better proposal would be to introduce a universal basic income.

Let’s use a simple example considering the recently announced 1% tax hike.  Assume you have 10 people, one who makes no money and then each subsequent person earning $20,000 a year more than the previous person.  In total, they would earn 900,000 a year in income.  A 1% tax would equate to 9,000 a year in tax revenues. 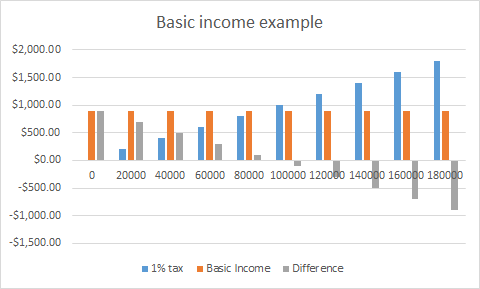 The benefit is that this creates a progressive tax system without the complexity.  Everyone pays the same flat 1% regardless of their earnings.  Everyone gets paid the same universal basic income amount annually or monthly regardless of earnings.  It is a simple to administer tax system with very low overhead. In exchange, it opens the door to eliminating most and hopefully all of the social nets with complex means testing and bureaucracy.  There’s no longer any need to create special tax reduction incentives or social programs for the people with low or minimal income.  That reduces bureaucracy and allows us to reduce the size of the government necessary to manage it.  This puts more people out into the workforce who can subsequent their basic income with full or part time work.  It reduces overhead on businesses and eliminates the need to force businesses to pay a “living wage” and allows them to attract people on the basis of working to supplement their basic income. The more people brought to the island at the high end of the pay scale the more money flows into the basic income pool.  As they say, a rising tide lifts all boats.

The purpose of this is to again create a progressive taxation system without the complexity.  Rather than a crazy 460 page tariff program that is a nightmare to administer, you replace the entire thing with a flat duty rate.  You take a portion of the proceeds and use it to create a basic income that helps subsidize lower cost items, mainly essentials for the poorer elements of society.  The poorer elements of society are more likely to put any savings directly back into the economy which helps fuel more economic growth and create more jobs.

In an ideal case we’d aim to streamline and eliminate government bureaucracy by reforming our tax systems to a flat tax structure and using the proceeds to create a universal basic income.