A few days ago we looked at a simple analogy to understand what the blockchain is. Interestingly on the same day, a small PR piece was published outlining a pilot of the use of the blockchain to facilitate transaction processing and settlement of cat bonds between two Bermuda based companies.

Blockchain-based smart contract technology has the potential to facilitate and accelerate the contract management process of such cat swaps and bonds. Each validated contract on the open shared infrastructure contains data and self-executable codes inherent to that contract. When a triggering event occurs which meets the agreed conditions, the blockchain smart contract picks up the predefined data sources of all participants, and then automatically activates and determines payouts to or from contract parties.

It will be interesting to see what other uses arise for blockchain and whether Bermuda can make its mark in InsurTech and RegTech.  Sadly though, Bermuda doesn’t feature in Deloitte’s report on RegTech or KPMG’s report on Fintech which highlights Insurtech. Bermuda would seem to be well positioned to host InsurTech and RegTech startups given its dominant position for offshore reinsurance.  Aside from Trunomi, where are they?

A US Based Fintech group recently suggested Bermuda has potential as a leader in Fintech by leveraging blockchain technologies.  Unfortunately, few understand what the blockchain actually is and why it matters for Bermuda.  The key innovation of blockchain is that it makes it easier and faster to verify information as accurate without relying on a special central authority.  It is hard, however, to really understand what that actually means in layman’s terms.

Let’s imagine for a moment that a member of the opposition proclaims that a week ago the Premier secretly grew a mustache and hid it from the people. 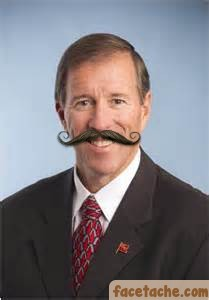 The island suddenly becomes consumed with debating whether or not the Premier had a mustache rather than focusing on more important national issues.  The Premier, of course, adamantly denies the existence of a mustache and is dismayed that the people are distracted.

Thus the Premier devises a plan to create a system going forwards to verify whether he has or hasn’t had a mustache.  The first step of the plan is that each day, he will publish a “state of the mustache” photo of himself to demonstrate whether he does or does not have a mustache. 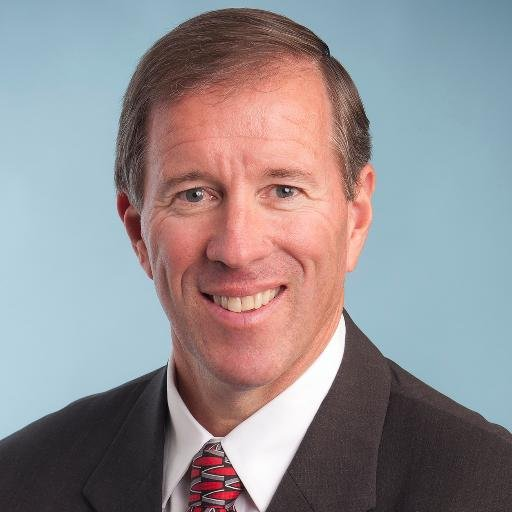 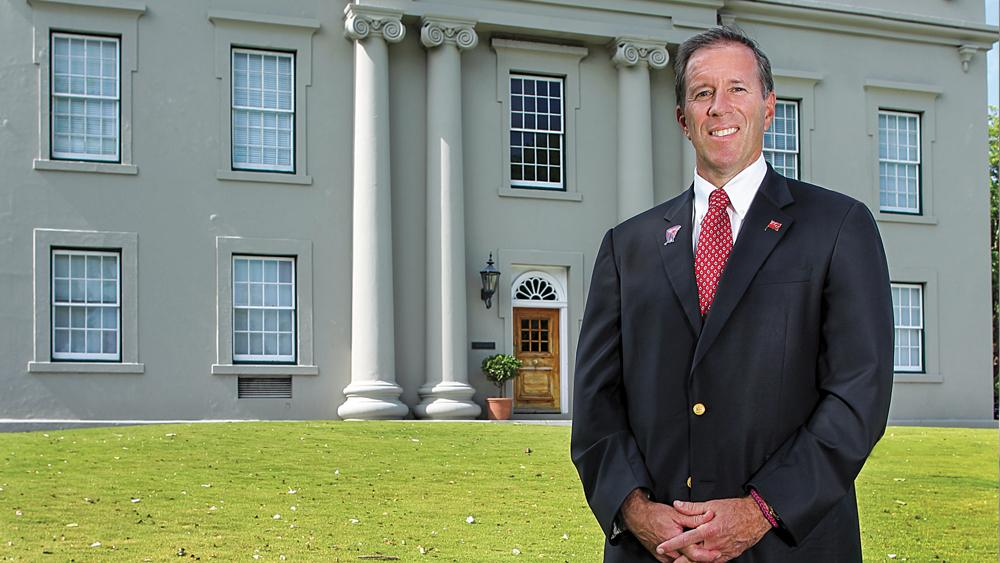 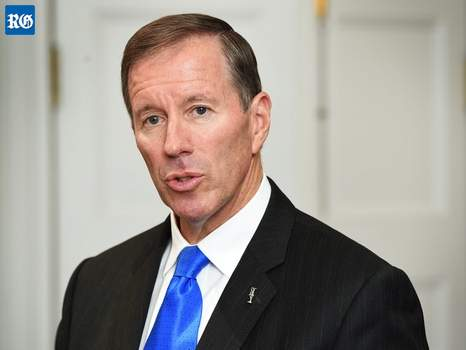 On its own, this is helpful that every day there is a photo published that makes it difficult to say that today the Premier has or does not have a mustache.  The trouble though, is that in order to verify that the Premier didn’t have a mustache yesterday or any day before, he would have to create a central mustache verification authority that would keep copies of photos from each day and make them accessible.  This adds cost and complexity as this authority becomes the place to go to anytime someone wants to verify the status of a mustache on any given day.  If it is expanded to contain information on whether any Bermudian has had a mustache the authority can quickly become overloaded.  Suddenly mustache verification requests could span weeks causing all kinds of problems because clearly the people cannot do anything else until we’ve verified whether or not someone had a mustache.

So, the second step is that he will create a chain of the photos.  Each day that he publishes a new photo, he will embed an imprint of the previous day’s photo. 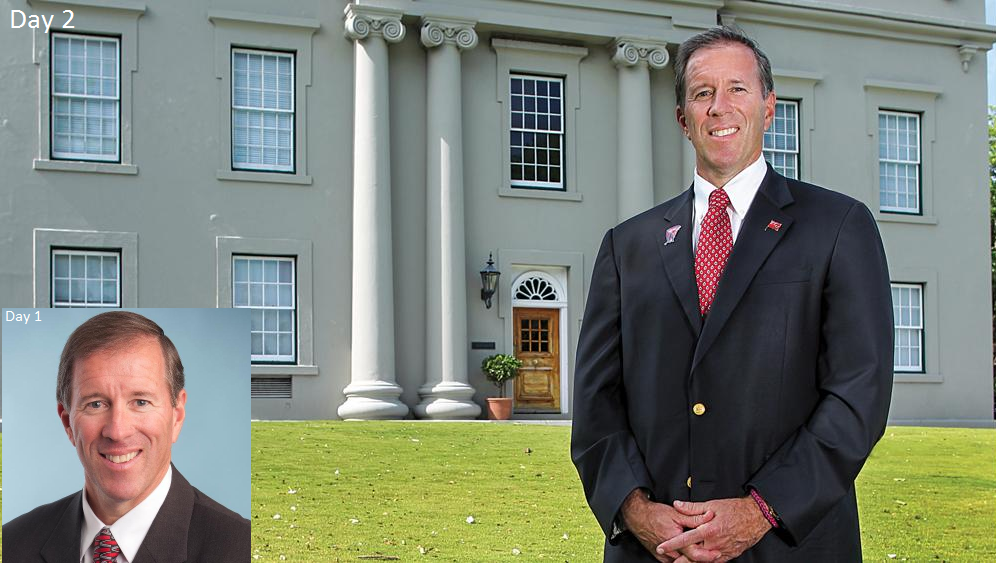 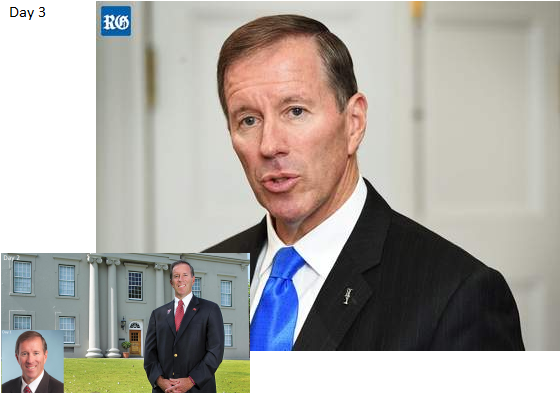 This creates a chain of information.  Each day’s photo contains information that links it to the previous days photo, all the way back to the original day’s photo, or genesis photo. Every recipient of the daily photo effectively has enough information to be able to verify all of the photos from the genesis photo right through today’s and thus can verify whether or not the Premier had a mustache yesterday without having to go to a central authority.

The benefit of this is that it becomes very difficult to forge that on day 2, the Premier had a mustache when he didn’t.  In order to do so, the forger would have to go back and embed the chain of photos from before day 2 as well as regenerate all images from after day 2.  On top of that, he or she would then need to convince everyone that their chain of photos is actually the correct one.

Since the Premier wants to avoid creating a central mustache authority and wants to provide the ability to verify the mustache status of every Bermudian, he suggests that rather than simply chain his own photos, each day all photo submissions will be combined into a block of photos. 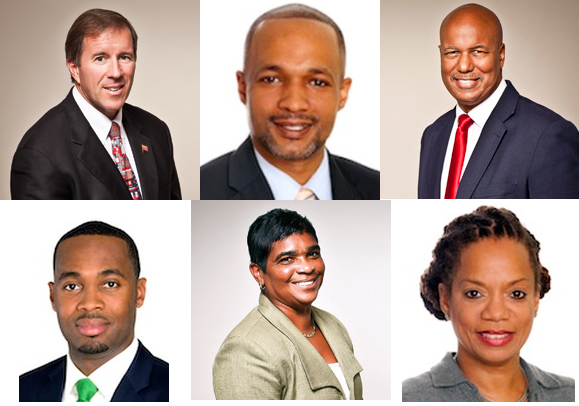 Each block would then be chained so that today’s block would contain an imprint of the previous day’s block like was done in the example using the Premier’s individual photos.

Now of course, again the Premier doesn’t want to create a central authority responsible for verifying each day’s block of photo submissions.  Doing so would create yet another government body with staffing requirements and potential bureaucracy.  So the Premier suggests that anyone is free to verify all of the submissions.  That person would create a new block of photos verifying the chain and send it out to anyone who’d like to receive it.  If that block is then verified as accurate by the recipients, the person would be paid a small transaction fee as a reward for doing this work.

The trick to creating a block is that the entire chain from the original genesis (that first block of photos) through to the latest must be verified and an imprint included in the latest block.  This is referred to as mining of the data to ensure validity.  The first person or company who can create a valid block wins the transaction fee.  Thus, each day people compete to see who can mine the data required to verify the blocks the fastest and win the reward.  Any blocks that are created after the fastest don’t count as the official block and are discarded.

Thus, a person looking to forge that the Premier had a mustache on day 2 would then need to not only regenerate and make verifiable all of the blocks after day 2, they’d also have to do it faster than the miners who are competing to verify just the latest day’s block.  Thus the longer the block chain gets, the more difficult the verification becomes and the more difficult and near impossible it becomes to introduce fake historical data.

The most commonly known use of a block chain is in the creation of the Bitcoin currency. Rather than photos, each block is composed of financial transactions. Block 1 may contain the following information:

Block 2 would be created to include the information “Bob transfers $5 to Alice” alongside an imprint of the original information in block 1.  That imprint being created using an encryption technique that makes it easy to verify that the imprint uniquely represents block 1.  Hence why bitcoin is referred to as a cryptocurrency. The miner of block 2 is paid a small transaction fee of for example $0.01 as a reward for being the fastest to create Block 2.  Each block is thus chained to the previous and it becomes rather easy to verify by working with the data from block 1 through each subsequent block to the current one.  It also ensures that it becomes easy to verify at what Bob’s balance was at any time between today and the genesis block’s creation without having to contact a central authority like a bank.

Since all of this can happen in absence of a central authority it means that people can verify and trust information much faster.  Rather than having to check with an authority whether the Premier has a mustache or whether Bob actually has enough to cover the $5 purchase, the information is readily available and verifiable in the blockchain to which everyone has access and a copy.

One of the important things to understand is that the block chain isn’t limited to bitcoin.  Almost any information can be encoded in this fashion from tracking currencies, legal contracts, personal identification and much more.  This is what has the finance industry so excited as traditional financial processes are heavily encumbered by the demands of verifying information as accurate via a central authority.  Alice certainly wouldn’t want to sell Bob something for $5 only to discover later that his balance is actually $0, just as you certainly would want to be certain whether or not the Premier had a mustache.

Now perhaps you understand why the key innovation of blockchain is that it makes it easier and faster to verify information as accurate without relying on a special central authority.  Bermuda certainly could be a leader in Fintech leveraging blockchain technologies.  The first step is making sure those in the position to make it happen understand what a blockchain is and why it matters.