“The socio-economic conditions of the Bermudian people will continue to decline if this trend is not reversed. Our unemployed are losing more and more hope with each passing day.

Sigh, this strikes me as either political posturing or an elementary misunderstanding that the private sector is what fuels our economy, not the public one.

It is really mind boggling how people fail to understand the jobs expats create.  Spending matters, plain and simple.  People on island spending money is what drives local business which in turn is what drives job creation in non international business companies.  We can’t simply hire everyone into government, though that may be what Mr. Hayward is hoping. Neither can we expect that Bermudians are a fit for all roles in International Business. We need to focus on local job growth and entrepreneurship.  To do, it is worth understanding that expat job growth and decline has a huge overall impact on local spending, which in turn is is what drives Bermudian job growth and decline. 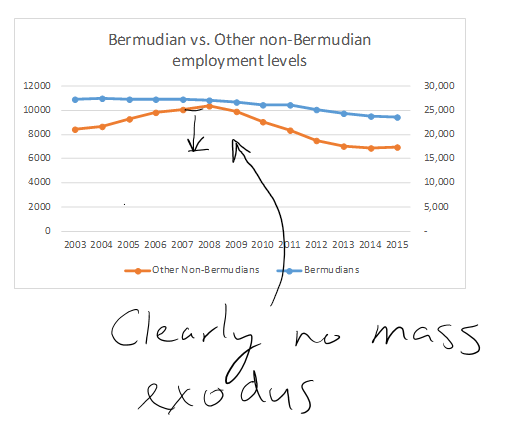 Of course, the frequent narrative is that it was the “global recession’s” fault, not policy.  It would make too much sense that a 30% drop in the expat workforce would indicate that fears of either a “mass exodus” or at minimum, a slow trickle came true.  Policy and environment has a huge impact on whether we can attract highly skilled foreign workers. Suggesting that Bermudian jobs should be created before Expat ones are is disingenuous.

Remember those approximations of expat spending titled “jobs don’t grow on trees”? Let’s update those and see what impact that kind of job loss does to local spending. 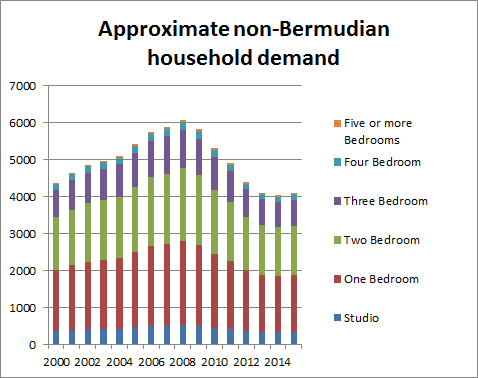 Still wondering why the housing market is in doldrums and the “executive apartment” moniker that was a popular label of nearly any rental back in the late 2000s has disappeared?  The above chart is why.

How has weekly consumption changed? 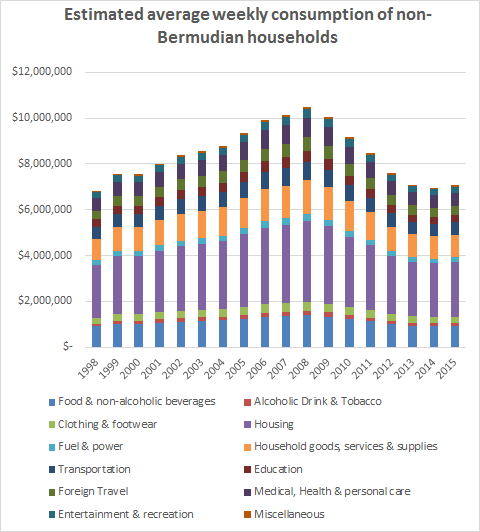 There’s nearly $3.5 million less spent EACH WEEK than was spent in 2008.  How many labour dependent jobs do you think $3.5 million in weekly spending accounts for?

Let’s break that down just so we can make it obvious.  Remember: this represents EACH WEEK of the year.

How about housing?  $1.15 million.  How many people were counting on rental incomes to help pay a mortgage or to buy things they need?  That’s a lot of money, every week, that isn’t being put back into the economy.

Want more jobs?  Let’s do whatever we can to encourage more highly skilled and highly paid expats to come to Bermuda and spend their money.