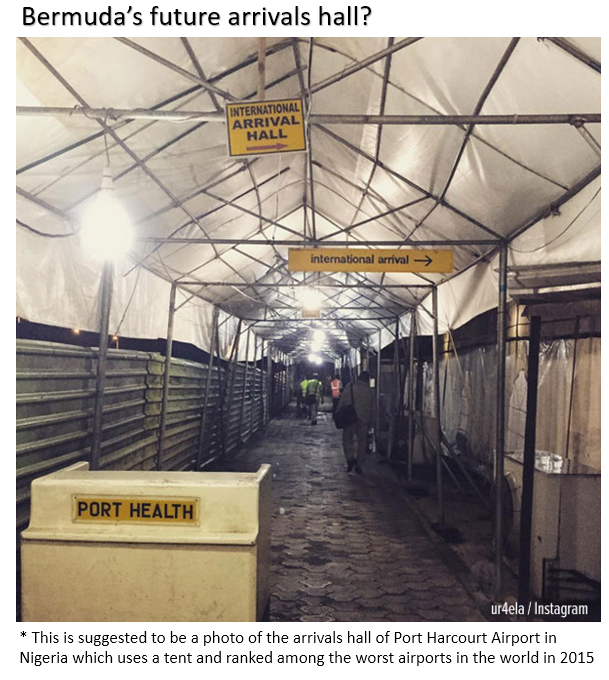 Some have been quick to jump on the fact that I said the airport is “a bad deal” and label me as an OBA supporter who admits it. Sorry to disappoint but I’m not an OBA supporter. The idea is rather amusing as I don’t have any association with the OBA and I’m pretty sure I’m disliked by a few in their circles just as I am likely disliked by a few in the PLP circles. I’m opinionated, tend to call it as I see it and occasionally I’m proven right which usually isn’t well received in larger organizations.

So here’s how I see the airport deal. Frankly, it sucks. I don’t like that we have to give away a 30 year agreement for revenues while we have to raise passenger taxes to pay for it.  We also have to divert existing revenues, have a foreign company run it and still have to maintain an airport while the new one is a built.  An airport that should have been maintained when we had lots of money but wasn’t. Sure its nice that we’ll get some jobs out of it and we’ll get a fancy, perhaps overdone airport that we’ll own in 30 years but it’s a still a raw deal.

Here’s the thing though, I don’t see a better alternative. A good deal would have been if we had money in the bank to pay for one in cash. Enough money to cover putting the project out to tender and paying for the whole project ourselves. Even better if we’d still had enough money left over for covering any cost overruns to cover our inability to both budget and manage infrastructure projects.

The problem is we’re broke and we need to come to terms with that.  Interest rates are starting to climb and we would be incredibly stupid to try to increase our debt load at this point any more than absolutely necessary. The reason being is that when we need to roll over our debt to new bonds we’ll be doing so at higher rates and when that happens our interest payments will jump and we’ll be forced to make some hard decisions. People aren’t simply going to keep handing us money if they don’t think they’ll get it back. Don’t think I know what I’m talking about?  How many other people were raising warning flags about the impact of interest rates on the housing markets and the risks of subprime back in 2007? Certainly I had no idea truly how bad things would end up being but I did point out the warning signs just like with many other things.

So what are the alternatives? I have yet to hear anything credible. The usual suggestion is that the project should be put out to tender to attract bids. Here’s the problem with that. We can’t afford to borrow money to pay for those bids. So, we need to attract people who can not only build the airport but also finance the whole project as well as take on the risks of any overruns. Oh, and we want them to employ Bermudians while doing it and not ship in cheap foreign labour because we desperately need jobs. On top of that, they need to have a decent track record because even if they take on the risks, we don’t want to end up having to maintain the current airport for years longer than expected because the project isn’t finished yet or gets abandoned half way through. Further, the project has to be worthwhile enough for the partner that they want to do it.

I’d love to hear some realistic alternatives but all I keep hearing is pie and the sky “if we put it out to tender people will magically appear because they feel so privileged that Bermuda would do them the favor of giving them such a project.” Let’s be realistic. The only way we’re getting a cheaper airport is if we import foreign labour from somewhere like China or India to build it and take risks on who runs the project. I simply don’t see that as a good option and I highly doubt the unions will like that more than the current deal. We can’t simply keep thinking someone else is going to come and solve our problems for us and magically still put Bermudians first and do it at a cut rate with no profit. If you think that’s possible I’d love to chat with you as I’m sure I can find some some wonderful pyramid scheme’s I’d like to introduce you to.

The sad and very hard truth is that we screwed ourselves. Up until Eugene Cox passed in 2004 we had great budgets and lots of extra money. Then without his guiding hand to control wayward spending, the money went to our heads. Now we’re broke. We have no money to spend on the multitude of much needed infrastructure projects that should have gotten attention over the last 20 years but didn’t. So do I like the airport deal? No, but show me what realistic credible alternatives we actually have before we screw this deal up too. Or perhaps your preference is that we simply skip the whole thing and resort to setting up a large tent at the end of the runway to act as our terminal.