One of the big questions I’ve been wanting to be able to answer is “where did the jobs go”?  It is rather easy to guess where they went but guessing isn’t very informative. It is far more useful to have survey numbers to do some analysis.

Thanks to the Department of Statistics who have fulfilled my request for raw Employment Survey Tables from 2009-2015, I can do some long overdue analysis of job trends.  (Which is far more interesting than political commentary)

As a teaser, here’s a couple charts taking a look at how employment numbers have changed since 2003. (Why 2003?  Simply because that’s what data I have available thanks to prior requests)

So let’s start by taking a look at Total Filled Jobs by Bermudian Status. 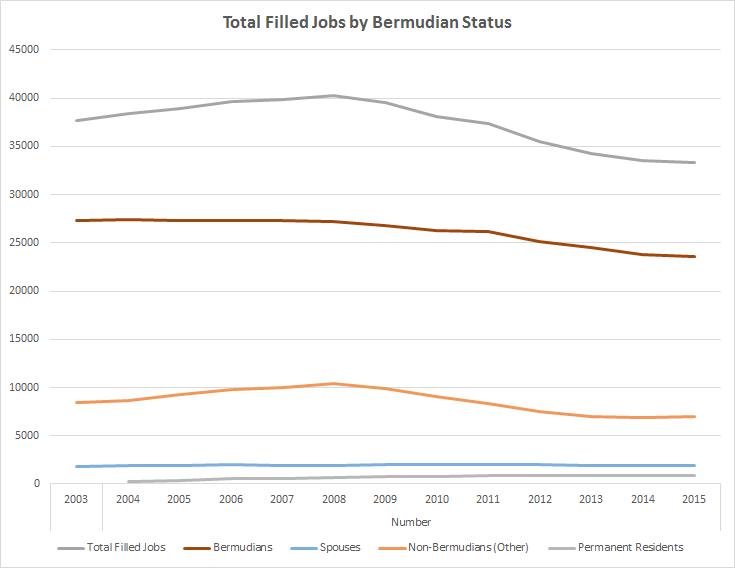 This chart gives us a big picture view of what has happened employment wise in Bermuda over the last 10+ years.

Some points of note, Non-Bermudians (Other) means non-Bermudians not including spouses and permanent residents, who are listed separately.  Also, Permanent Resident numbers weren’t available in 2003

The big takeaways here is that

Here’s a different perspective of the same numbers as a stack chart.

The 2004 peak of Bermudian jobs suggest that this may have been due to Bermudians reaching full employment.  In other words, there were more job opportunities than there were Bermudians willing to fill them.

One question that needs to be raised here is that if this indeed was the case, why did we massively stimulate the economy with a variety of capital projects financed by a ton of extra debt between 2004-2008?  All this when it is unclear what we stood to gain if we already had full employment?

Full Bermudian employment should be our goal.  We reached it and kept our foot heavily on the gas pedal of our economy.  That is, until we slammed on the brakes by introducing term limits at the same time as a global recession.  What impact did that have?  Hopefully the numbers will tell us more.