Today’s lesson has been watching my post on how misleading the PLP’s tourism chart was drive a ton of traffic and discussion based upon an over sensationalized headline that was intended to be sarcastic.  My aim was to demonstrate how the PLP’s chart and “back to average” headline was an equally misleading chart based upon the same data and an equally terrible sensationalized headline.  What I didn’t really plan for was the number of people who took a title like “This ridiculous chart shows how the PLP clearly destroyed tourism” seriously, somehow missed the “ridiculous” part and not actually bothering to read the piece.

No wonder fake news is king and traditional blogging and media is dead.  In the old days it was possible to just write half decent content regularly to get a reasonable following. That was back when there was no commenting on news articles and people barely knew about facebook.  Now there’s an overload of content, cat photos, jokes, and stupid videos. We’re inundated with it.

Many people just don’t really care to actively go out, read and verify things for themselves anymore.  It seems like its easier to pull-refresh-react on facebook or twitter. Really, my traffic has been dead despite a return to regular blogging vs. the old days where it was rather easy to build up a regular readership.  Now, large social media driven spikes are the norm with a flatline for the rest.  Get a few shares and traffic spikes but otherwise people don’t come back.

Why am I even still blogging?  I want to understand how things have changed.  Given that I work in tourism I need to understand how social media marketing works, how to advertise on facebook and drive interest in products and services.  Sure I can read articles, but it isn’t practical experience.  I know google analytics inside and out enough to explain a compelling story of traffic already going to a site but I don’t really know how to create viral content and drive traffic.  So, hack together some half witted articles, throw some headlines on it and see what sticks. 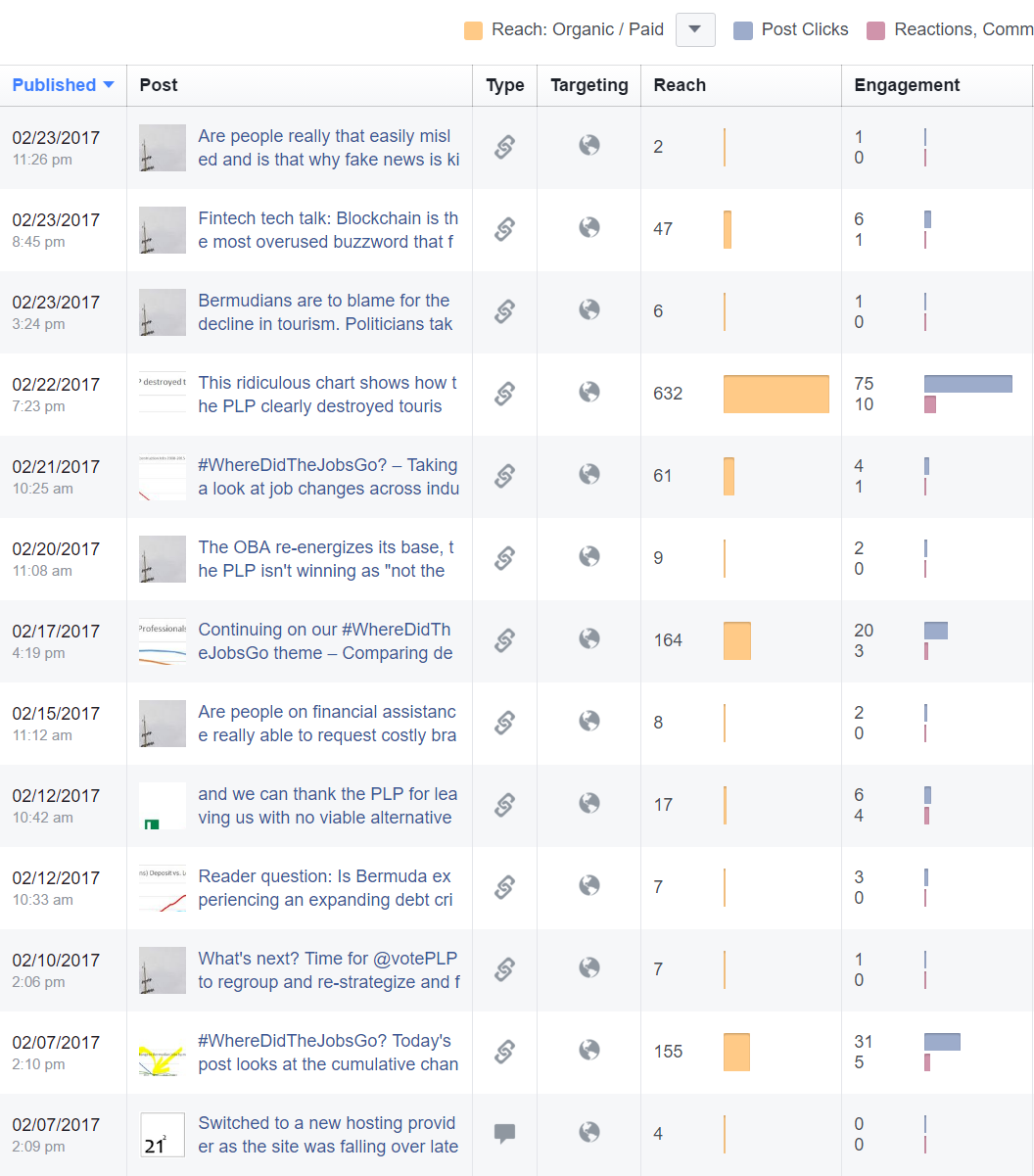 For  example, here’s what facebook shows you about shares on  a page in terms of reach vs. engagement.  It’s actually quite interesting stuff.

Apparently highly sensationalized misleading headlines, even when they’re intended to be clearly sarcastic, drive traffic.  They also drive up a firestorm of interest from people keen to express their opinion based upon a headline.  All this without having actually read any of the content while readily ignoring key words like “ridiculous” that are supposed to offer a clue that I’m not actually being serious here.  I’m still reeling from it as I’ve watched people whom I wholly expected to take a deeper view into things react before evaluating.  It really helps illustrate why fake news seems to be so successful these days.

In the age of an abundance of content that is being pushed at us through mediums like facebook, people seem to ignore a sense of getting to the truth and just accept the narrative presented.  This is a large reason why I’m so frustrated with the PLP’s misleading chart.  Politicians are all too ready and willing to take advantage of people rather than focusing on moving the island forwards.  Is that all we’ve descended to? Shallow headlines and terrible charts that mislead people to evoke a response?  That’s what works these days?