As suspected, the opposition to the airport deal dried up The PLP overplayed the Airport Card and the OBA has run a relentless campaign of public outreach, feedback and awareness building.  Public support has now shifted from opposing the airport deal to supporting it.  Likely the PLP will have to regroup and re-strategize and the OBA will reflect on what worked.

Many, like this writer, likely have just gotten tired of the airport deal.  Ultimately its an airport, we get it back in 30 years and if it truly proves to be a bad deal, that’s 30 years the OBA won’t be able to dodge the blame for it.  It is really too bad that we’ll be spending a fortune to create a non-Bermudian looking monstrosity, but it certainly isn’t worth tarnishing our reputation of stability or disrupting America’s Cup over it. 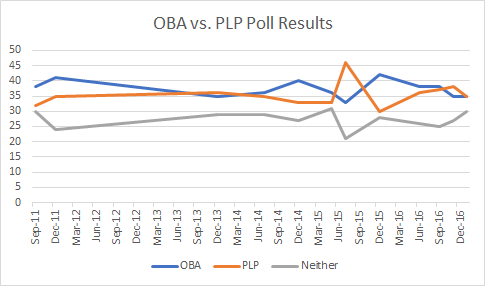 The question is, what next?  I put together longer term stats from the Royal Gazette’s polls going back over the last few years to get a better idea of the context of the momentum of each party.  I’m not really sure why the Jul 2015 number was so different but it did foretell the shift in momentum.  Ultimately, the PLP were on a successful run up until the Genevieve-Tweed crusade with the OBA sliding.  They were neck and neck, possibly with a shift in momentum approaching.

The PLP will need to shift focus and start thinking about the upcoming election.  They’ve done a good job at opposing the government but haven’t really laid out a plan for what they’d do as government.  This will be the time they start capitalizing on the OBA’s forgotten election pledges and setting the tone.  Given the loss of momentum and the approaching hype of the America’s Cup we may see them shift to a more mature stance.  Perhaps trying to highlight the lessons learned from being removed after their first stint in power and how they have learned from their mistakes and starting to signs of reinventing themselves under their new and capable leader.

The OBA may get complacent and take forgranted this recent win of support or they may take the time to take a step back and really evaluate what they’ve acheived.  They very clearly invested a tremendous amount of effort in public outreach, educating the public, consulting (sort of), leveraging social media and generally attempting to involve the people like never before.  Is the OBA finally shifting away from most used play in their playbook?  It’s hard to say.

The odd one out who perhaps has suffered the most in this is “The President of the BIU” Chris Furbert.  After people didn’t heed his call to turn out to protest the airport he attacked the people for lack of support rather than inflecting on what he might have done to kill support.  It is likely that investing heavily in Reverend Genevieve-Tweed when he wasn’t by any definition a “Son of the Soil” and threatening America’s Cup likely evaporated support for his cause.  Fundamentally people tend to go back to asking themselves “How will this benefit and impact me?” and “President” Furbert didn’t deliver compelling answers to those questions.  One can wonder if Chris Furbert will survive this and still be President of the BIU not long from now.  Certainly attacking the people for his missteps in leadership doesn’t seem like a very good strategy.

So what’s next?  What strategy will the PLP pivot to and will the OBA learn the value of involving the people in the process?  Likely we’ll have to wait and see.