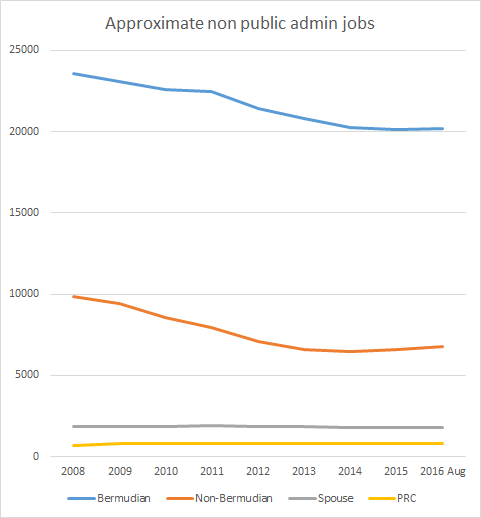 Recently there has been discussion that the non-Bermudian category was the only status category to see job growth in the last two years. There had been no official releases by the stats department suggesting this however it turns out it was discussed in parliament and reported in the newspaper.  On an absolute basis it turns out to be true, but quoting simply the absolute numbers doesn’t tell the whole story.  Government is finally seeing significant and much needed reductions in job numbers through voluntary attrition (retirements).  If you exclude declines in public administration jobs then there actually was Bermudian job growth alongside non-Bermudian job growth.

The PLP and the BPSU were absolutely correct that the non-Bermudian job category saw significant growth of 158 jobs when considering the period up to August 2016 while Bermudian jobs declined.  The thing is, when digging through the numbers there seems to be a lot more to the story to be discovered than simply “non-Bermudians got all the jobs”.  Government jobs accounted for heavy declines which significantly impacted the Bermudian numbers but government workers weren’t fired or laid off.

What led to this realization?  I didn’t get how how the PLP and the BPSU were claiming that only non-Bermudian jobs saw an increase in the last 2 years while the latest data from the stats department only showed 5 new non-Bermudian jobs added in 2015.  I assumed I must be missing something and I was.  A reader was kind enough to point out that some mid-term employment data was provided via an article back in February but wasn’t released as official stats updates.

Let’s take a step back and look at the numbers.  We’ll start by looking at one of my previous charts of government jobs vs. all other jobs updated with these Aug 2016 numbers. 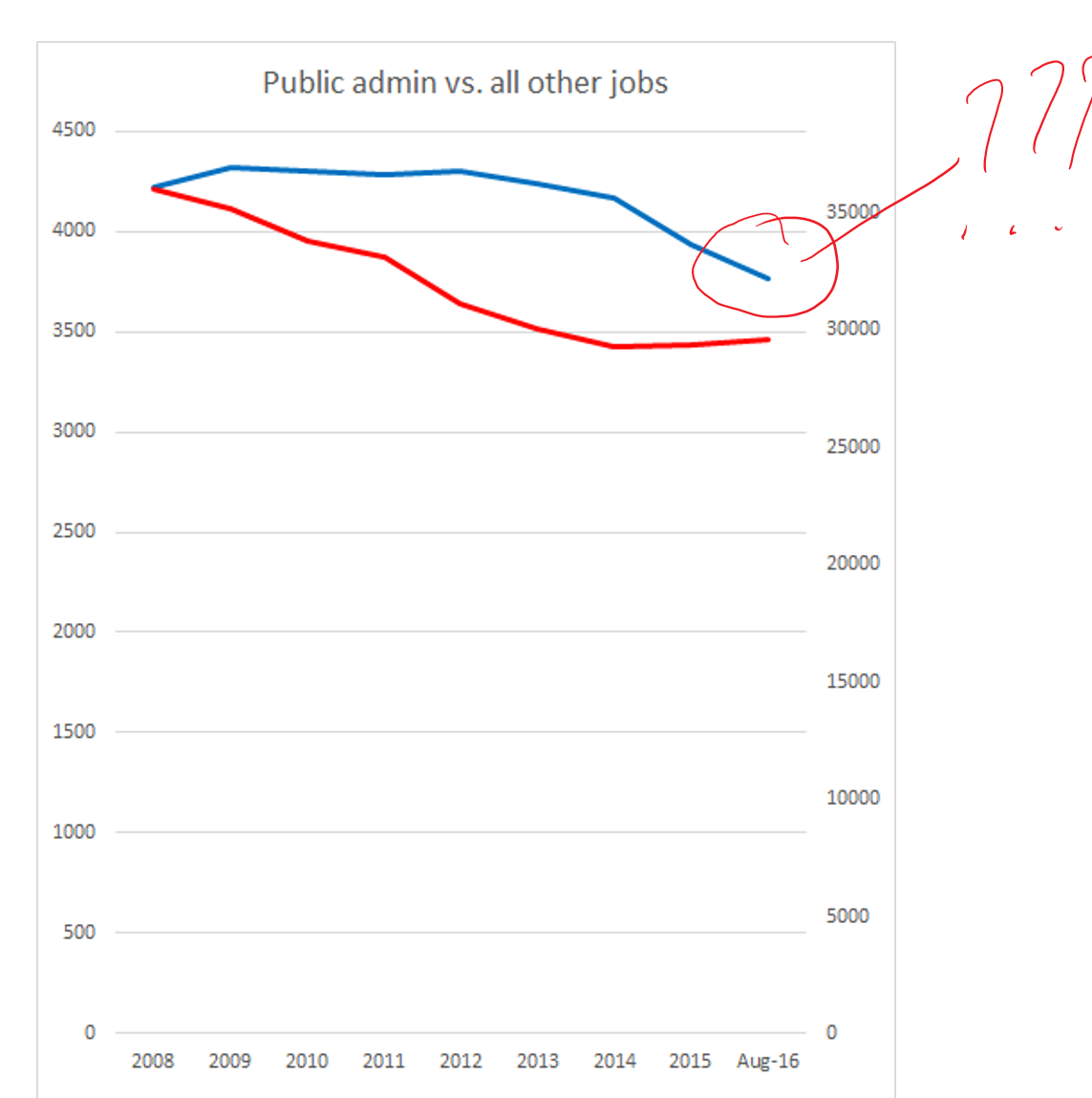 Note: government jobs are on the left axis, all other jobs on the right.  I accidentally chopped off the labels.

That is a significant drop in public sector jobs.  169 less jobs in August of 2016 vs. 2015 to be exact.  The chart above shows the stark reality of 2008-2013 where government has been incredibly slow in reducing jobs while all other sectors (except social work and healthcare) have been hit with declines.

Since there were no mass firings or layoffs in government, the only explanation for these declines is voluntary attrition where people retired or resigned.  This is one of the things the OBA has taken the slow and steady approach to and while it has been excruciatingly slow it does seemingly seem to be bearing some fruit.

The problem is that numbers weren’t provided breaking down the impact of government attrition by status so we can get a better idea of the non-government job picture.  So, let’s attempt to approximate how many jobs were reduced by way of attrition.  We’ll do some fancy approximating of the 169 public sector jobs to figure out how many likely declined by status in Aug 2016.  We’ll take the average values of public administration jobs from 2008-2015 for each status category, determine the percentage breakdown of each and then apply that to the 169 to approximate the changes by status in 2016. 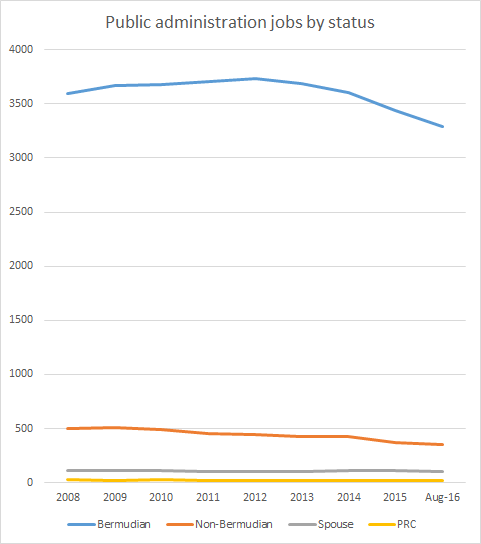 Roughly speaking the breakdown of government workforce by status using an average across the data is 86% Bermudian, 10.5% non-Bermudian, 2.5% spouse of Bermudian and 0.5% PRC.  So that 169 reduction could roughly be approximated to 145 Bermudians, 18 non-Bermudians,  4 Spouses and 1 PRC.  The actual numbers could vary somewhat from this but unfortunately they weren’t available so this is what we’ll work with.

So, if we do some further approximation and remove public administration from the overall jobs numbers broken down by status we can get a better idea of how jobs have changed over time.

Non-Bermudian jobs show a noticeable trend upwards however we can also notice that there is an ever so slight improvement in Bermudian jobs as well.

The raw approximations tell us that roughly 71 Bermudian jobs and 176 non-Bermudian jobs were added when excluding government job declines. One could sensationalize this with a fancy chart and misleading headline but ultimately the real story is that when you look at the numbers in detail, we actually are seeing an improvement in job growth for both expats as well as Bermudians when looking at data available up to August 2016.