Despite being featured prominently in the image caption for the Royal Gazette’s “Calls for a living wage in Bermuda” article, I noted with interest that it local economist Craig Simmons doesn’t seem to actually support the concept of a “living wage”.  The three options he does support are quite a bit different which makes it ironic how he is featured with the headline. Ultimately Mr. Simmon’s options help outline why a minimum or living wage can be a poor option economically while there are viable alternatives that would achieve the the same goals. 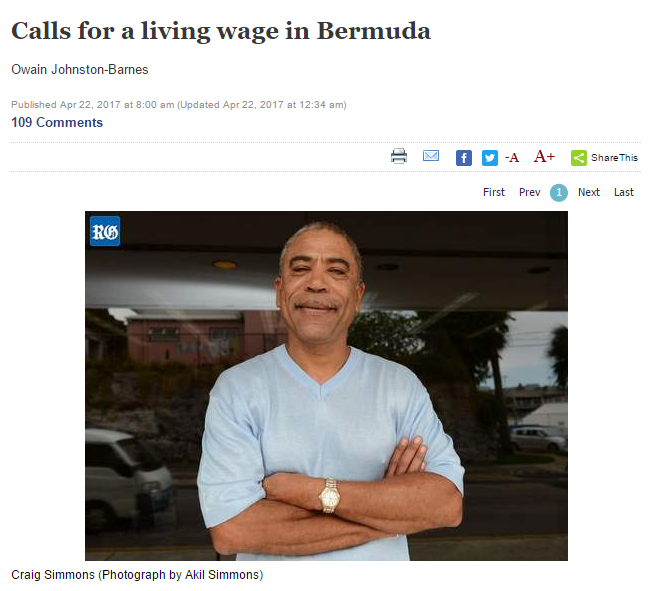 First off it is important to understand what exactly a living wage is.

A living wage is defined as the wage that can meet the basic needs to maintain a safe, decent standard of living within the community.

Certainly a noble aim. However, a “living wage” limits the scope of the goals to only providing for a decent standard of living through means of a wage which leaves anyone who is not fully employed caught short. There are also many arguments to be made about the negative economic impacts that a living wage or minimum wage can have.  A living wage acts as a tax on employers of low skilled workers and would actively disincentivize low skill job creation in Bermuda’s economy.  Bermuda’s economy is not like others and too many fail to realize that concepts that may work elsewhere won’t work here.

With that in mind a prudent individual should recognize that while economist Craig Simmons does seemingly support the goal of providing individuals in society with means to maintain a decent standard of living, he doesn’t suggest a minimum or living wage as a means to do it. None of the three options are wage minimums and economically that makes a huge amount of difference.

Turning his attention to the concept of a living wage, he said there were three options, including establishing a guaranteed income, creating a wage subsidy, or a cash transfer scheme.

Let’s cover each of these.

A cash transfer scheme is the concept of directly providing cash to eligible people.  This already exists in the form of financial assistance and could be expanded.  The big problem with financial assistance as it exists today is that the means testing used can discourage employment and can encourage abuse. We’ve already covered the example of people on financial assistance acting entitled to costly and unnecessary brand name medications. There are other examples such as financial assistance penalizing those with minor incomes encouraging them to stop working to get full benefits because no supplement is offered.

A wage subsidy moves a little closer to the mark.  Rather than penalizing employers with a minimum the government provides assistance with wages to help raise them.  It could be achieved through cash support to boost wages or through a negative income tax. A negative income tax is an extension of a progressive tax system where people earning below a threshold are paid money from the government rather than paying taxes.  While this is an improvement and reduces the negative economic disincentives related to a “living wage”, it adds complexity and only assists workers.

The third option Mr. Simmons outlined is a guaranteed income.  Also known as a basic income, a guaranteed income is a concept this writer first advocated 10 years ago.  It is defined as a scheme in which “all citizens or residents of a country regularly receive an unconditional sum of money”.  The purpose is simple, reduce bureaucracy and complexity and provide an unconditional cash stipend that can act as a rising tide to lift all levels of society.  It lacks the complexity of progressive taxation schemes and reduces the burden financial assistance so only those in genuine need can achieve help.  Economically this is far more fundamentally sound as it can be funded through more equitable flat taxation schemes that don’t unfairly punish employers who rely on low skill work.  It puts cash in the hands of everyone, not just workers.  People like the elderly, disabled, and children would all get a basic income.  Entrepreneurs would be encouraged rather than punished. It would incentivize job creation by making employing people cheaper and open the door to more part time work opportunities, lowering the cost barriers for lower skilled work. Exactly the opposite of a living wage which penalizes many for the benefit of workers.

The goals behind a living wage are noble ones though economically they just aren’t feasible.  Mr. Simmons’ has outlined 3 better options that are more economically feasible. A guaranteed income being the most promising of the options.  It is ironic and rather sad that Mr. Simmons’ has been featured in way that makes it look like a “living wage” in its defined form would be a good option for Bermuda.  It simply isn’t but that doesn’t mean there aren’t viable alternatives we should be considering.