The Royal Gazette has an article up downplaying the potential for America’s Cup to return to Bermuda.  Those who have followed its progress would know that this has always been a possibility. 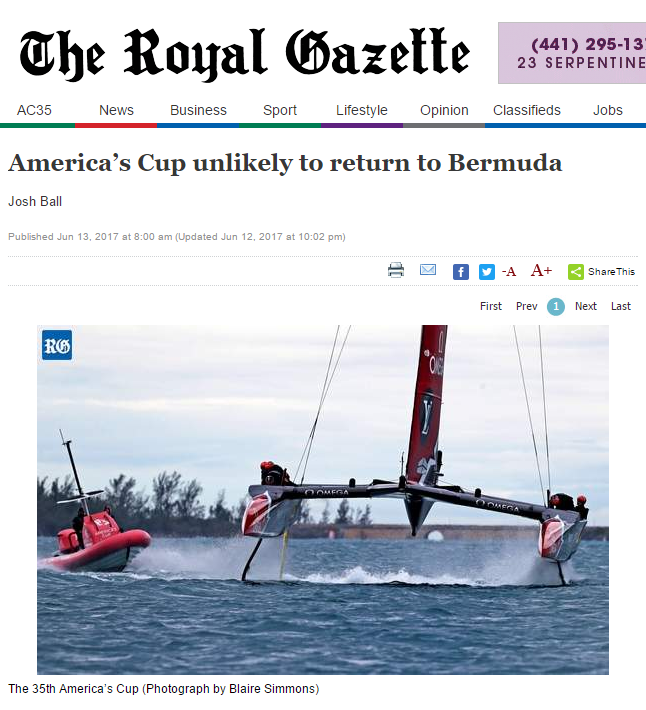 My understanding is that the decision of where to host comes down to 3 core considerations.

This leads me to a few thoughts on the business side of things.  It is widely known that many factions in the America’s Cup are trying to convert it to being a more profitable venture similar to Formula One.  In order to do so they are heavily reliant on building solid TV coverage.
The few reports on coverage so far is that it has not been ideal. This suggests they need interest through encouraging more teams and more events spread out over time. Hence the world series events and the reduction in boat sizes to encourage more teams.  The more competition, the more potential interest and viewership.

Thus we’re seeing an aim to shorten the competition from a 4 year cycle to a 2 year one.  Likely more focus on the world series and enough focus on the finale to sustain a big climax.  I believe that ideally they’d aim for a host of the finale on the East Coast of the US or alternatively Bermuda as the timezone sites well enough for coverage of the US during the day and EU in the evening which has the best potential for building viewership.  Chicago or anywhere else on the east cost still stand out as potentials.
Once the viewership is large enough then it can really be hosted anywhere but for now, the America’s Cup is a fringe sport.  Google Trends shows it pretty clearly when you compare America’s Cup to Formula One over the last 5 years.  They clearly want to convert the blue line to be more like the red one and the tiny spike of the last event in San Francisco pales in comparison to the regular interest in Formula One.

One other thing. People having animosity towards hosting the America’s Cup and making it political certainly doesn’t help as I’m sure they’d rather see focus on the event itself, not articles about local politics.
Will they host the finale in Bermuda again?  Only the winner knows.