“It was clear to me as the economics guy that what we were proposing for immigration was very sound economics.

Here’s the problem.  The OBA completely and utterly failed to explain how their immigration proposals were sound economically and how they would benefit the average Bermudian.  They had tunnel vision and were only capable of viewing and explaining issues from their own perspective.  This versus trying to put themselves in the shoes of the average Bermudian to better understand and explain how this would benefit them.  This was one of the fundamental flaws of the OBA’s communication strategy and why they were consistently described as out of touch.

The OBA was wholly accepted as very strong economically.  The problem was, few people really understood how or why and they didn’t help themselves by explaining it. For example, nowhere in the former government’s communications regarding pathways to status did I see a coherent explanation of it’s economic benefits.  The following was closest and it wasn’t very compelling:

New applications will represent a revenue-enhancing opportunity as applicants pay the substantial fees involved under the legislation. New Bermudians, with their newfound security, could seek to purchase real estate or inject capital into Bermuda companies as directors and shareholders. Assets which will be earmarked to leave Bermuda will be more readily available for investments in the local economy. These contribute to an economic multiplier effect and feeds back into positive movement in Bermuda balance of payments and increased Government revenue.

It reads like we were putting status up for sale.  How does this benefit the average Bermudian?  Why would we want to openly sell Bermudian status?  It wasn’t encouraging from most any perspective.  Looking at the rest of the argument for pathways to status it wasn’t much more encouraging.  It was “the right thing to do”. Our policy wasn’t not consistent with international human rights and Bermuda is the only country not to have it.

Here’s the problem.  The framing was all wrong.  How you present an idea is very important as it steers the perceptions and how people feel about that idea. How people feel about an idea can often be more important than the idea itself. People, especially in a time of recession, care more about their own basic needs long before they care about ‘the right thing to do’ for non-Bermudians.  If you can’t explain how Bermudians will benefit, people will not only reject the idea, they’ll get annoyed that this is your focus vs things that are perceived to actually benefit Bermudians.  Thus, that is what we saw happen.

Worrying about basics like how you’ll buy food, how you’ll pay rent, the health and welfare of your loved ones are far more important priorities than whether or not we’re doing the right thing on behalf of our expat community.  People ask themselves “why should I care?”, “what will this do to benefit me and my family?”. The big problem with the OBA’s communication was that they failed to provide good answers to these question on most issues.

Certainly there were valid economic reasons to be made, however they simply weren’t elevated enough.  For example, one of the big issues we face is that jobs in international business, the core driver of foreign income for our island, have not really grown over the last few years.  This is a huge problem that far too few people really understand and hasn’t been explained very well. 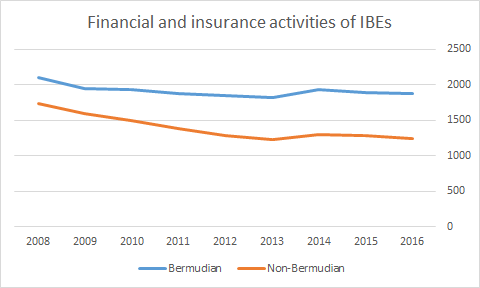 Policies like term limits and the global recession contributed to a decline in IB jobs that simply haven’t recovered.  We aren’t growing jobs and risk losing more.  One of the big problems we face are situations where long term residents such as senior IB staff and Executives consider relocating off island and taking jobs with them.  I’ve met numerous senior IB individuals who lament that their children cannot work on island at age 16, may have been born and raised here and really only know the island.  It is just as easy to say “well, you knew that coming here” as it is “well, I’m going to relocate somewhere else and take my entire department of Bermudian and non-Bermudian jobs with me”. This is the crux of it.  We can’t have our cake and eat it too.

Everyone agrees we need jobs and yet nowhere in the entire Pathways to Status saga did I hear arguments of how it would held protect and help create jobs.  There were no explanations of how it would benefit the average Bermudian to support it so why would anyone have done so.  “The right thing to do” is a completely different argument than “it will protect and create jobs”.  Yet, the OBA never took the time to frame things properly from the context of the average Bermudian and as such allowed the issue to be framed as manipulation of the populace to boost their voter base.  It is a perfect example of why the OBA was seen as out of touch.  They did not take the time to view and explain their proposals from the perspective of the average Bermudian.