For those who have been following the government’s moves with regards to Distributed Ledger Technology (DLT), Premier Burt provided an update on the upcoming legislation that will be distributed for feedback soon.

The recording of this morning’s parliamentary session is available here.  The Premier’s statement is covered in the recording between 10:12am and 10:23 am.

As I have covered in my previous writings on distributed ledger technology and cryptocurrencies, I am wholly wary of the cryptocurrency bubble and associated scams but am very bullish and supportive of government moves to provide a solid regulatory framework to encourage DLT innovation in Bermuda.

The Premier’s mention of disclosure requirements sound encouraging.  We absolutely need a clear regulatory framework to be in place that provides a secure, trusted and transparent process for Initial Coin Offerings (ICOs).

I am highly skeptical of most ICOs due to their nature as a glorified uncollateralized loan agreement that provides little security for the investor.  ICOs of this form are basically IOUs that provide the bulk of the reward to the token issuer while leaving the bulk of the risk with the purchaser. My concern is if potential investors do not fully appreciate the risks and no protections are offered to ensure an issuer cannot simply raise a bunch of money and then disappear.  There are of course cases where this kind of financial arrangement is perfectly valid, so I await further details on what the task force has come up with to balance risks vs. opportunities.

I am hopeful that provisions are being made to allow for the tokenization of securities.  Namely, providing the ability for companies to issue rights of ownership in the form of tokens stored on a blockchain.  The present means of issuing stock in companies is cumbersome and could well be made more accessible and transparent. Thus, legislation legitimizing the tokenizing of assets would be welcome.

One of the concerns I have about the Premier’s statement is the suggestion that companies looking to offer an ICO will require consent from the Minister of Finance.  I would prefer to see us establish a politically independent body that reviews and authorizes these rather than than place power and control in the hands of a politician.

We’ll have to wait and see what is published in the coming weeks to find out more of what is intended by this legislation.

Last night I attended a crypto currency meetup at ConnecTech.  Despite not considering myself an expert in cryptocurrencies, blockchain and distributed ledger technology, I was surprised by the many misconceptions people have.  As someone who has done a lot of reading on the topic and given a lot of consideration as to how Bermuda could build an industry around these technologies I was quite surprised.

After responding to a few questions and suggesting I’d done some writing about it, people asked where they could read it.  Thus, I’ve compiled a summary of all that I’ve written about how Bermuda can build a new tech industry around cryptocurrencies and distributed ledger technologies.

Insurance is a maturing industry, Bermuda’s economy has stagnated.  How can Bermuda reinvent itself?

The most important step in creating a new industry was illustrated in Marc Andressen’s piece “What it will take to create the next great silicon valleys, plural”.  In order to create a thriving industry we need to create a streamlined regulatory environment that can enable it to flourish.

June 2016 – The Blockchain explained… aka does the Premier have a mustache?

A primer on the basics of blockchain using whether the former Premier had a mustache as an analogy.  What are blocks, how are they chained and what does it have to do with creating a means for anyone to verify the data contained?

Mar 2017 – Will Bermuda’s economy be disrupted by “FinTech” and “InsurTech”?

What makes a “Tech” company different from a regular Finance or Insurance company?  Why is Bermuda not a “tech” innovation center and does Bermuda have any real “Tech” companies?  What can Bermuda do to change this?

Nov 2017 – What are cryptocurrencies?

Jan 2018 – Wary of the cryptocurrency bubble

Cryptocurrency markets are flashing telltale signs of being in a bubble. What are the indicators that it’s a bubble?  What are the risks of ICOs?  Is there still opportunity for Bermuda in this budding new industry?

Feb 2018 – Should Bermuda be investigating, pursuing and trying to incubate the development of distributed ledger technology?

Many Bermudians are terrified of the prospect of government investigating and attempting to incubate cryptocurrency and distributed ledger technologies.  Should we be doing it and what opportunities does it present?

Why is proving you are who you say you are so difficult?  What is wrong with current forms of identity and what challenges does that pose for conducting business?  Why is identity the foundation of the future innovation distributed ledger technology can bring?  What is Bermuda’s opportunity in introducing it?

Finally I’d like to add a video of Arthur C. Clarke in 1974 predicting what computers would be like in 2001.

An important thing to understand here is that in this video Mr. Clarke didn’t predict new technologies, he predicted technologies that existed becoming more accessible.  Everything he talked about then already existed, it simply wasn’t accessible to the average person.  His vision and foresight was having seen how other technologies like telephones evolved and became accessible.  He then applied that evolutionary thinking to computers to understand that one day someone would have access to all of the same things he had access to then.

This is a key thing to understand about technological evolution.  Distributed ledger technology isn’t a revolutionary change.  You could readily build anything today without blockchains and DLTs using existing technology.  The evolutionary leap, however, is that the technology is being commoditized and made accessible to the point where you don’t have to have a PHD in distributed computing to be able to build distributed solutions.

One of the things about the recent budget that raised an eyebrow are the very optimistic revenue targets.  The Customs Duties estimate is quite high and leaves me wondering how the number was devised and what contributed to it.  The concern being, if we cannot meet our revenue targets we won’t be able to match the deficit targets and would need to borrow more, so it is important that these estimations are accurate.

A few questions arise.  How accurately have we predicted revenues in the past?  How much of an impact did the duty hikes the OBA made have?  How much of an impact did America’s Cup have on customs revenues?  Will the OBA’s duty hikes have created a permanent increase that will sustain revenues?  Was the America’s Cup impact so small that revenues weren’t impacted?  Are we counting on substantial import growth?  How do we arrive at this higher number? 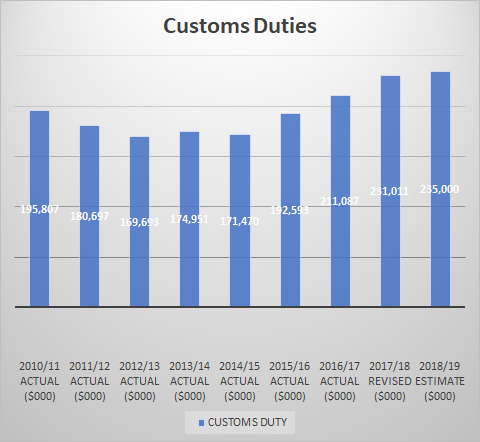 This is quite a high estimate and it raises the question of how accurate we’ve been in the past at estimating customs duty receipts.

Here’s a view past customs duty estimations for review (note, the left axis is adjusted to start at 150k to provide a focused comparison, also note the chart is in 000s).

What we can see looking historically (2005-2006 was the earliest data I could find) is that we initially tend to over estimate our customs duty receipts.  The revised numbers have usually come in lower than expected and the actual numbers even lower.  So even though it looks like last year’s revised numbers exceeded the estimate, there is the possibility that the actual number could come in lower as happened in 2013-2014.

2017-2018’s number seems to have been chosen as a benchmark.  One of the big questions that arises is why the Customs Receipts number for this year is much higher and is it a reasonable approximation for 2018-2019.

One of the big changes in the 2017-2018 budget was a hike in rates for a variety of categories.

Justifiably this would have raised revenues.  It is difficult to know by how much based upon publicly available numbers that I could find.  It would be great to know if the Customs Department provides more detailed breakdown of imports within these bands to be able to understand how these tax hikes translated into increased revenue.

Another questions that arises is how much of an impact did America’s Cup have?  As this writer has argued many times, America’s Cup represented mostly a temporary stimulus of the one off event as well as an increase in population for a few years.  While certainly many imports were brought in duty free, the additional purchases of the teams that resided here and the ACBDA staff likely weren’t.  This likely contributed to increased customs receipts, however the removal of the AC stimulus does not appear to be a concern for the 2018-2019 estimation.

Let’s take a look at Imports By Commodity Groups data provided by the Statistics Department’s Quarterly Bulletin of Statistics to get an idea.  Here’s a chart looking at year over year imports by quarter. 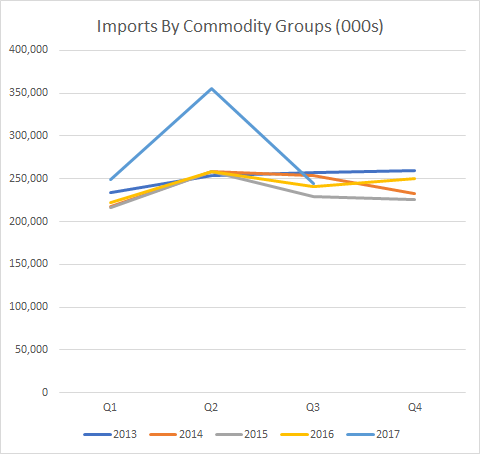 It is hard to say for certain that these increases were driven by America’s Cup and whether they were dutiable, but they do stand out as a substantial outlier.  A bigger question would be whether these were sustainable increases or if they were one offs.  Thus we can take a look at the commodity group breakdowns to see where the increases occurred.

Looking at the Q1 data we can note that the bulk of the increases came in the form of Machinery, Transport Equipment and Finished Equipment.  Can it be presumed that each of these categories represent one-off purchases rather than ongoing purchases?  It could certainly be argued that machinery and equipment are something you purchase once and use for an extended period vs. something like food or fuels which are purchased on an ongoing basis. 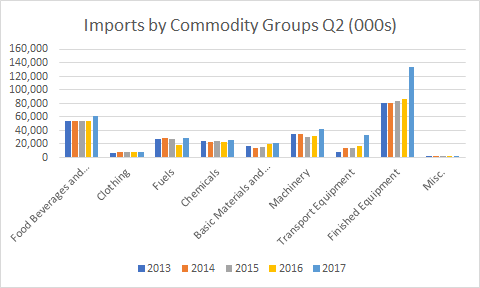 Taking a look at the Q2 breakdown we can see that again, the bulk of the imports came in Machinery, Transport Equipment and Finished Equipment.  Now certainly, some of the imports may have duty free or temporary and related to America’s Cup, however it is hard to know how much.

So how much of the revenue growth can we count on as sustainable?  We don’t have the best track record when it comes to estimations.  The tax increases are a wildcard as they certainly could have caused a hike but they just as easily could cause a drop in demand, especially if people bought things before the hikes.  These estimates will be something to keep an eye on because if we cannot meet our revenue targets we won’t be able to match the deficit targets and would need to borrow more.

I fear that with partnerships like AirBnb experiences we're setting ourselves up to have our tourism product commod… https://t.co/B1KROE5I86
h J R
21square

#ThroneSpeech #this Post Offices: Amendments will be made to permit the development of new postal products & servic… https://t.co/wS2YmgudUk
h J R
21square

Shot across the bow for OBA's "we told you so" and doomsayer style of politics. Might be time to start coming up w… https://t.co/WSzYp0sYju
h J R
21square