A few days ago, the Blockchain Task Force gave a presentation on their progress.  It absolutely deserves a standing ovation from the cheap seats.  As a big evangelist of Blockchain and Distributed Ledger tech, I couldn’t be more pleased with their direction so far and how much it aligns with what I’ve written about over the last few years.  I’ve been giving some thought with regards to the suggested e-ID initiative and thought I’d share my reflections.  Ultimately, I have concerns that the government may be attempting to build its own e-ID solution rather than embracing those being built elsewhere.  In my view, there is far too much risk involved with us trying to compete with our own solution and far more reward to be gained embracing third party solutions.

Around this time last year I met with John Narraway, now the head of the business development side of the Task Force, to discuss self sovereign identities and how in my view they are Bermuda’s biggest opportunity to set a foundation for innovation.  I wrote a bit of a primer about it here.  I’m a very big fan of the efforts of the task force in this regard and its potential opportunity for Bermuda and while I am pleased to see forward movement, I am hopeful that we are creating an environment for innovation rather than attempting to innovate ourselves.

While it is still early days, my fear is that the government could end up trying to build their own digital id solution.  Even worse, it could be a centralized one controlled by the government, the very anti-thesis of a self sovereign identity which purports to place identity ownership in the hands of the individual or entity rather than a third party.  To understand the problem with centralized solutions you only have to look at hacks like MtGox, Coincheck, Equifax, Ashley Madison, Paradise Papers….  We place ourselves at considerable risk if we hold the keys vs. delegating that risk to others.

One of the problems is that this isn’t an empty space.  There are many, many entities looking to build solutions.  For example, here’s a chart of just some of the efforts in Europe. 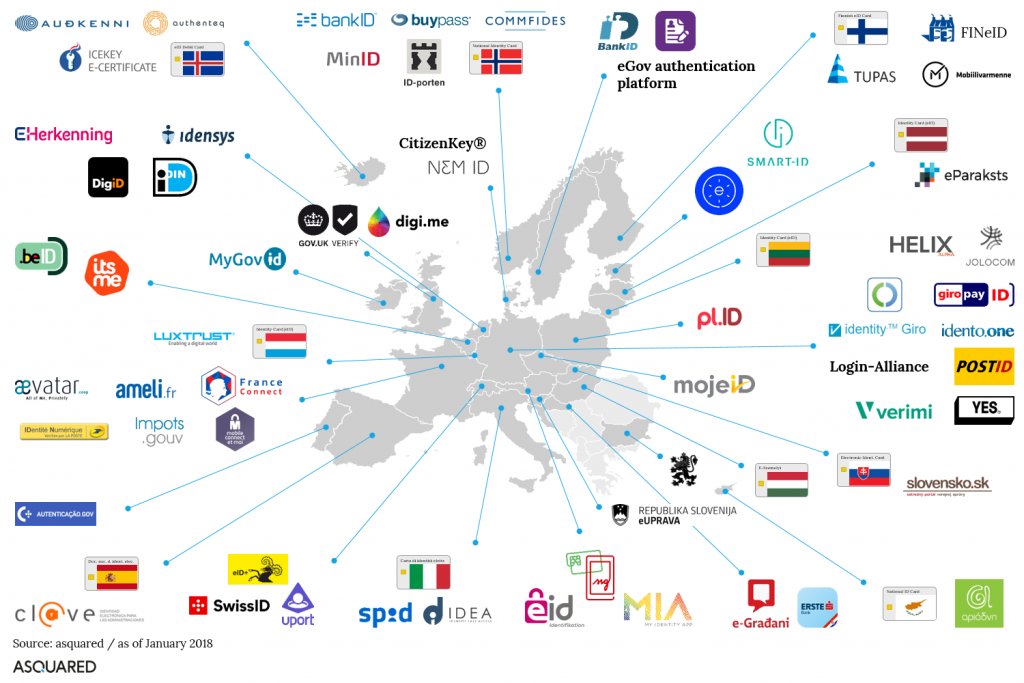 Unfortunately Bermuda is behind the curve and is talking about innovating in a crowded and competitive space. We’re too late to be a leader in implementation of digital ID solutions.  Instead Bermuda should focus on being an innovative regulator.  It aligns with what I’ve suggested in the past, government needs to be less hands on and more of a regulator and facilitator.

Thus, I would much rather see government focus on creating a legislative framework to support third party identification systems rather than create our own.  Let other parties build solutions, invite them to come here and embrace their solutions instead.  Examples such as local providers like banks, utilities and legal firms being encouraged to authenticate the ids and claims of entities on those systems as well as the BMA working to recognize and accept verified identities on those systems for KYC and AML.  That would be a much more welcome direction than Bermuda itself trying to build its own solution, and possibly one that offers much less risk.