The PLP are hiring for a raft of new positions, announcing spending initiatives and solving pressing issues by increasing spending. They say they are spending money that was already budgeted for and are blaming the OBA for un-budgeted spending. This is all fine and nice if you ignore the bottom line. Will we see a reduction in the deficit this year and a balanced budget next year as promised?

In opposition, the PLP liked to highlight the growth in the debt under the OBA. 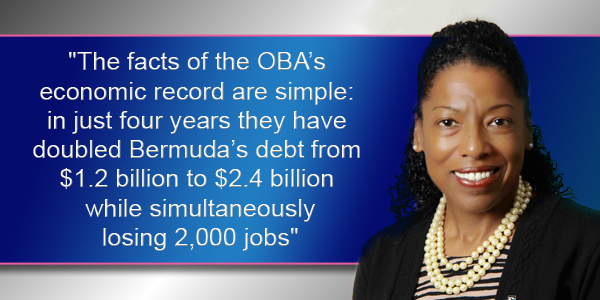 This was politically convenient as it ignored the rather sizable deficit the PLP left behind from their last time in government.  It ignored how impossible it is to prevent the debt from increasing when you have a considerable deficit.  It ignored that in order to quickly reverse the trend, massive cuts would have had to have been made.  The PLP held the OBA to account for all increases in debt regardless of the cause and this could come back to haunt them.  Not only do we have more interest payments to make but if we can’t manage to balance the budget, the problem will only get worse.

The PLP blamed the OBA for our increases in debt.  The PLP are blaming the OBA for un-budgeted expenses.  However using this to excuse budget overruns and an inability to reduce the deficit may seem convenient, but it won’t change the bottom line.  The OBA didn’t win 2/3rds of parliament and they aren’t the ones now holding the purse strings.  The OBA aren’t the ones in the position of having to make the hard decisions of where not to spend money in order to reduce the fiscal burden  The OBA also didn’t convince the population that any increases in debt are unacceptable.  Blaming the OBA is all fine and good, but it won’t balance the budget.

I fear that with partnerships like AirBnb experiences we're setting ourselves up to have our tourism product commod… https://t.co/B1KROE5I86
h J R
21square

#ThroneSpeech #this Post Offices: Amendments will be made to permit the development of new postal products & servic… https://t.co/wS2YmgudUk
h J R
21square

Shot across the bow for OBA's "we told you so" and doomsayer style of politics. Might be time to start coming up w… https://t.co/WSzYp0sYju
h J R
21square